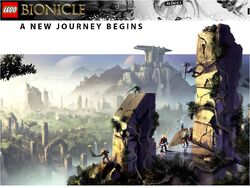 2015 is the first year of the rebooted BIONICLE line after the end of the previous iteration of the line that ran from 2001 to 2010. It is the twelfth year to have a story and the fifteenth year since the line was initially launched. It is set on the island of Okoto, and focuses on the Toa and their quest for the Masks of Power in conflict with evil forces; this storyline was continued into 2016.

Three books have been published. There are two full-fledged comics, and short strips appear on the boxes for the sets. In the winter wave, a total of fourteen sets were released, and 5 more sets were released in summer 2015.

Also released was a series of animated shorts onto LEGO.com and LEGO's YouTube channel.

The legendary Maskmakers, Ekimu and Makuta, made Masks of Power for the harmonious islanders of Okoto, called the Protectors. The Protectors valued Ekimu's masks more, leading Makuta to create the Mask of Ultimate Power as an act of rebellion against his brother. When he donned the Mask of Ultimate Power, Makuta lost control of himself and the island was nearly destroyed. Ekimu knocked the mask off of him, and the mask, along with Ekimu's Mask of Creation and Makuta's Mask of Control, were scattered across the island. Both Maskmakers were left in a coma.

Fourteen sets were released during the Winter wave, including the six Toa, the six Protectors, the Lord of Skull Spiders, and the BIONICLE Hero Pack.

(Each Toa can combine with their respective Protector.)

(Each Protector can combine with their respective Toa.)

The Summer wave consist of 5 sets. The sets will be villains, with one featuring Ekimu, and the Mask of Creation.

A new series of books has been announced for release in the latter half of 2015. The first book will be 128 pages long and Ryder Windham will write it.

Another book, to be released as both a graphic novel and an e-book, has been confirmed. Set to be published by Little, Brown Books for Young Readers, the book will be released before the 2015 holiday season.

In addition to other media, online animations are also being produced as the primary method of storytelling. While the first few movies were trailers for the new storyline, a number of "episodes" have also been produced that tell the full events of the story.

BIONICLE: Mask of Creation was released for iOS and Android before later being released as an online game on the BIONICLE website; the Unity 3D plugin is required to play the web version. The game is based around the Toa's quest for their Masks of Power and the Mask of Creation.

Retrieved from "https://bionicle.fandom.com/wiki/2015?oldid=193746"
Community content is available under CC-BY-SA unless otherwise noted.