The BIONICLE Wiki
Register
Don't have an account?
Sign In
Advertisement
in: Agori, Spherus Magna, Species,
and 5 more
English

The Agori are villagers on Spherus Magna. There are eight types of Agori: the Fire Tribe, Water Tribe, Ice Tribe, Jungle Tribe, Rock Tribe, Iron Tribe, Earth Tribe, and Sand Tribe. After the disaster that hit Bara Magna in 99,000 BGC (100,000 years before the awakening of Mata Nui), the Sand Tribe reverted to primitive, bestial Zesk. Similar to the Agori but a separate species were the Bone Hunters.

The Agori are very similar to Matoran; in fact, the Great Beings modeled Matoran after Agori. However, the Agori have no innate elemental power and all of their tribes had a mixed amount of males and females. Agori can live to be as old as Matoran or even older, but can eat like humans do. It is unknown how they reproduce, but it is known that they do, unlike Matoran. Agori are also fully organic when they come into being, and would choose whether to receive biomechanical implants, and most usually do.

The five tribes mainly stayed separate in cities such as Vulcanus, Roxtus, Iconox, Tesara, Tajun, and Atero. They fought with each other for resources with the use of Glatorian, but friendships between tribes were not frowned upon. Before the disaster, Agori were much more advanced, but post-disaster, they were only good at fixing things, not creating new things. Agori like Tarduk and Berix looked for leftover remnants of ancient Agori technology buried in the deserts of Bara Magna.

Following the Battle of Bara Magna and the collapse of the Great Spirit Robot, the Agori united with the Toa and Matoran to begin new lives on the reformed Spherus Magna.

When the Shattering occurred, some Agori were trapped on the chunk of Spherus Magna that was later known as Bota Magna. The Agori that inhabited this moon wore armor made from metal and plants. Their weapons were made mainly out of rocks and wood. For unknown reasons, they dislike the mention of the fortress containing the imprisoned Great Being on their planet, as they threatened Lewa with spears when he said he came to them from there.

As follows is a list of all known Agori: 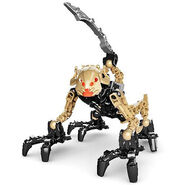 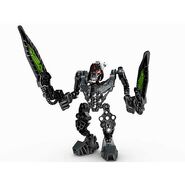 The Agori wielded many tools, including weapons and shields.