BIONICLE: Matoran Adventures was the second game to be released for the Game Boy Advance on October 29, 2002, in North America and on November 1, 2002, in UK and PAL Regions. It is rated E for Everyone. The player controlls one of six Matoran as they head around fighting the Bohrok Swarms from Koro to Koro.

The story is set during the Bohrok War on the island of Mata Nui. It begins with Kongu traveling through Le-Wahi to find Turaga Matau while defeating a Bohrok swarm and the Rahi he encounters along the way. After finding the Turaga and defeats the boss Rahi; Kongu and Turaga Matau then travel to Po-Wahi. After finding Onewa and completing their quest in Po-Wahi, they travel to Ta-Wahi. 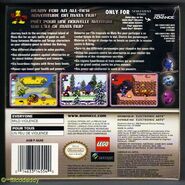 Back of the US version. 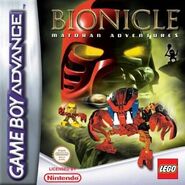 PAL version boxart.
Add a photo to this gallery
Retrieved from "https://bionicle.fandom.com/wiki/BIONICLE:_Matoran_Adventures?oldid=172132"
Community content is available under CC-BY-SA unless otherwise noted.