BIONICLE: Quest for the Toa was the first BIONICLE game released for the Game Boy Advance on October 1, 2001 for North America and on November 2, 2001 for U.K. and the PAL Regions. It told the tale of the Chronicler Takua, as he searched for the Toa Stones to bring the Toa to Mata Nui. Its name was originally Tales of the Tohunga, but it was changed due to legal issues with the Maori. It was developed by Saffire Corporation.

The story starts out on the beaches of Mata Nui. Takua, after hearing he is needed in Onu-Koro, traveled there. After arriving, he found that the village's Turaga, Whenua, was missing. He ventured into the Onu-Wahi tunnels to find him. After defeating a Vatuka, Takua freed the Turaga. While in Onu-Koro, he found Onua's Toa Stone, as well as saving the village's Vuata Maca Tree.

Takua did the same thing in each village: Ga-Koro, Po-Koro, Le-Koro, Ko-Koro, and Ta-Koro, respectively. After finding Tahu's Toa Stone, he traveled through the lava fields for a while, until he accidentally catapulted himself to Mata Nui's beaches again, losing his memory. He put the stones into their spots when he landed on Kini-Nui. The Toa were summoned to the island. 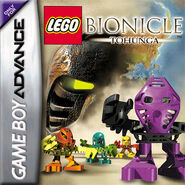 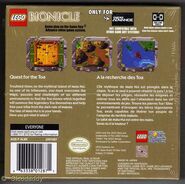 Back of the box.
Add a photo to this gallery

Retrieved from "https://bionicle.fandom.com/wiki/BIONICLE:_Quest_for_the_Toa?oldid=196754"
Community content is available under CC-BY-SA unless otherwise noted.