The BIONICLE Wiki
Register
Don't have an account?
Sign In
Advertisement
in: Locations, Bara Magna, 2009,
and 4 more
English

Bara Magna was once a section of Spherus Magna, and held an advanced civilization. Many of the warriors on the planet were enlisted to fight in the Core War over the Energized Protodermis discovered elsewhere on the planet. During the war, the planet shattered, and the largest fragment was Bara Magna. The majority of the population were also on Bara Magna at the time, though a minority were trapped on the moons.

The members of the Rock Tribe, which had previously inhabited a different area on the planet, were cut off from their home as a result of the disaster. The Skrall attempted to establish a camp near the Black Spike Mountains, but encountered the violent shapeshifters which they dubbed Baterra, who killed many of their number.

The Sand Tribe, already a reclusive tribe, gradually devolved into savages as a reaction to the Shattering. It also worsened the availability of the scarce resources of the planet, and helped create a need for a new planet-wide social system. The Agori, organized into tribes, began hiring Glatorian to fight in arenas for resources.

The Skrall, commanded by their only remaining leader, Tuma, migrated south, and into the previously uninhabited city of Roxtus at the base of the Black Spike Mountains. Tuma, observing the Agori social system, began to participate in it as well, as part of his newly formulated plan of global domination. The Rock Tribe was approached by Ice Tribe Agori Metus, who sought to ally with them out of self-preservation.

Recently, the Element Lords escaped their confinement, and began fighting in the area north of the White Quartz Mountains, seeking to enter the Valley of the Maze and claim the power of the Great Beings. Three Agori - Tarduk, Crotesius and Kirbold - launched an expedition to the north to discover the secret of the Red Star, and had many altercations with the Element Lords during their travels.

Tuma, in response to the migration of the Baterra, ordered an attack on the free city of Atero on the day of the Great Tournament. The Skrall arrived and savagely took the Arena Magna by force, killing many Glatorian and Agori. The survivors fled the arena and moved into the surrounding caves in the desert, to plan their defense against the Skrall.

Mata Nui, having been trapped in the Kanohi Ignika and exiled from his body, soon arrived on Bara Magna. He was discovered by the Agori Metus, who offered him a ride to Vulcanus where he observed the arena match between Ackar and Strakk. Intervening to save Ackar's life from the treacherous warrior for the Ice Tribe, Mata Nui gained the friendship and alliance of the Fire Tribe warrior and fellow Glatorian Kiina. During this, the village of Tajun was attacked and destroyed by a united force of Skrall and Bone Hunters.

Traveling to the Underground Lab of the Great Beings by Thornatus, Mata Nui and his companions were attacked by a Skopio, and a group of Bone Hunters hired by Metus to assassinate them. They survived the encounter, but arrived too late to save Tajun. After exploring the lab, Berix and Gresh joined the party and witnessed Mata Nui using the Ignika to bestow Elemental Powers on the three Glatorian before departing for Tesara.

In Tesara, Ackar interrupted an arena match between Tarix and Vastus to request that the arena match system be discarded in favor of uniting the villages against their common adversaries. Although this was initially met with skepticism, the Agori agreed to this. While in Tesara, Kiina and Berix were lured away, kidnapped by the Rock Tribe and brought to Roxtus.

Mata Nui traveled to Roxtus and challenged Tuma in one-on-one arena combat for the freedom of his allies. Using fighting techniques learned from Ackar, Mata Nui defeated the leader Skrall but the victory was interrupted by the revelation that Metus had betrayed the villages. A group of Scarabax beetles distracted the Skrall forces long enough for a force of Glatorian and Agori to arrive and challenge the Rock Tribe. During the struggle, Mata Nui transformed Metus into a serpent and won the battle by combining his power with that of the Glatorian.

Following the battle, Mata Nui journeyed to northern Bara Magna in search of the secrets the Valley of the Maze could tell him about the power of the Great Beings. He returned with a power source for the ancient robot that the Agori had inadvertently turned into their home. Taking control of the robot, Mata Nui began to pull Bota Magna and Aqua Magna towards Bara Magna to reunite the planets. However, his efforts were interrupted by Teridax arriving on the planet in Mata Nui's old body. The two began fighting as the Battle of Bara Manga occurred simultaneously on the ground, with Teridax eventually gaining an advantage and declaring the planet his.

Mata Nui refused to back down, however, and used his strength and determination to redirect one of Teridax's gravity attacks at Aqua Magna and Bota Magna. His efforts were successful, and the power of gravity pulled the two fragments further into the gravitational field of Bara Magna, causing them to plummet irreversibly onto the desert planet. During the descent, Mata Nui pushed Teridax into the path of the fragment from Aqua Magna, and it hit the back of Teridax's head, impacting the core processor and killing Teridax. The two fragments then collided with Bara Magna, reforming Spherus Magna. Using the rest of the robot's power, Mata Nui made the Bara Magna desert bloom with flora.

Mata Nui then went dormant into the Kanohi Ignika, leaving the people of Spherus Magna to start a new life on the restored planet.

Bara Magna was inhabited by several sapient species including the Agori, the Glatorian, the Skrall, the Bone Hunters, the Zesk, and the Vorox. Bara Magna was also inhabited by dangerous creatures, typically living in desert regions, and other animals used as transports, including the Sand Stalkers and Rock Steeds. After Teridax was killed the inhabitants of the Matoran Universe migrated here.

After the Shattering, several experienced warriors, including Certavus, Tarix and Ackar, developed a new system. To prevent wars, two Glatorian, each one representing a tribe, would fight in an arena when there was a conflict. The winner's tribe would obtain the resource, area, or whatever the conflict concerned, while the loser's tribe would receive nothing.

When Spherus Magna was reformed by Mata Nui, the desert began to bloom with flora. The rest of the desert became the Great Desert and the Rahkshi migrated here. It also serves as a village for the Sand Tribe and the Po-Matoran.

Bara Magna was located in the Solis Magna System.

Bara Magna had a river after the disaster (and more than one before it), but never had any oceans. The vast majority of the planet's surface was a large desert, save for a few scattered locations with different climates. There were six cities on Bara Magna, all inhabited by Agori. Notable plants were the Thornax, hard, spiky fruit, which grew in the deserts. Glatorian used these as ammunition in arena matches. Teridax did not consider conquering Bara Magna, since it had relatively little worth conquering. 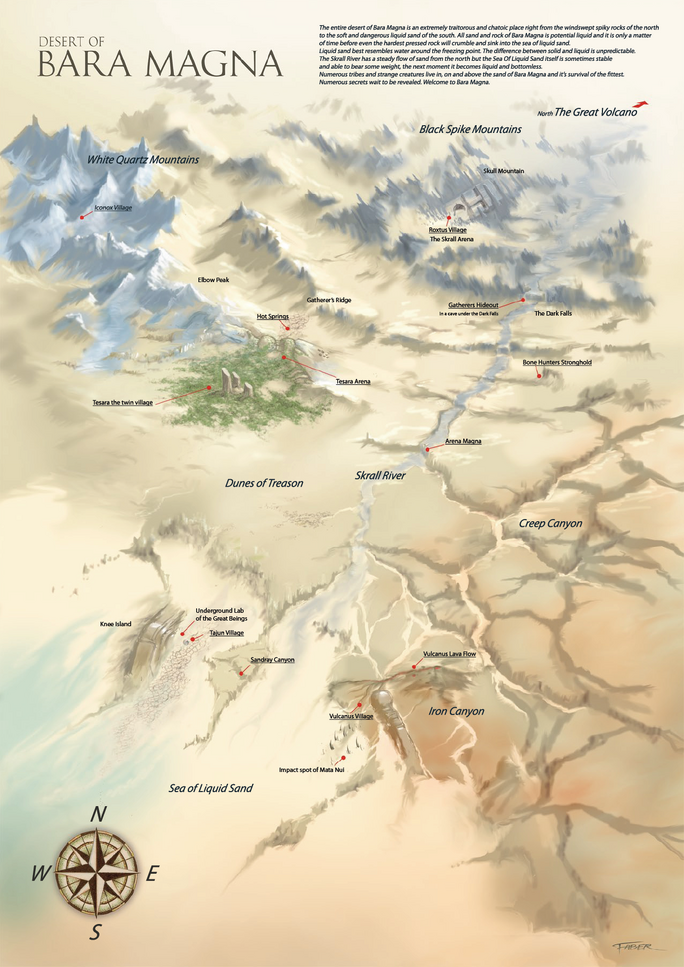