Bohrok Online Animations were a series of animations released and shown on the official bionicle site during 2002. There was a "report" which was written by Vakama with each episode. The animations and reports told about some important events that happened to the Matoran while the Toa were doing their own task.

The episode begins with a Mata Nui Stone in the sunlight. Suddenly, it is destroyed by a bolt of fire. Huki, Hafu, and Turaga Onewa overlook the smoke. Onewa warns of a Tahnok attack, and says Hafu must knock down his statues. Hafu refuses.

Later that day, the Tahnok approach Po-Koro. Outside the village is Hafu! Hafu is destroying his art to seal off Po-Koro from the Bohrok. Hafu is for sure to be killed.

Hafu, the famed carver from Po-Koro, was trapped outside the village today in a desperate attempt to protect his home and fellow Matoran from a rapidly approaching Tahnok swarm. “The last I saw, the Fire Bohrok were closing in on him,” explained Huki, “but the smoke and the ash were so thick that no one was able to see what happened.”

Scouts from Po-Koro had spotted the Bohrok earlier, but the swarm was moving so quickly that Turaga Onewa had no time to evacuate his village. The only alternative was to block the entrance to Po-Koro by using the stone carvings on the Path of Prophecies. Hafu, the carver who created the Path, volunteered to topple the giant stones in order to save the village. Turaga Onewa was gathering Matoran to protect Hafu when he heard the commotion.

“The Tahnok reached us much faster than we anticipated,” said the Turaga. “Fortunately, Hafu kept his head and acted quickly. His bravery may have saved the village.”

When asked if he thought that Hafu would be found, Turaga Onewa reassured the villagers. “Pohatu, along with Gali and Kopaka, have been defending Po-Wahi against a particularly fierce group of Tahnok – which is why we had a much smaller swarm to face today. I’m confident that once Pohatu returns, he will find Hafu and bring him back to us safely.”

Hafu is surrounded by Tahnok from last episode. Huki wants to help, but Onewa will not let him go. The leader Tahnok launches a Krana at him, but Toa Pohatu grabs him with the power of his Golden Kakama. He then uses his Komau to control Huki and he fires a Comet Ball on an edge, allowing Pohatu to get Hafu to safety. Huki hugs Hafu, when the Tahnok begin advancing forward.

In the Onu-Koro Highway, water floods it and Gahlok are seen swimming into the Koro. Onu-Matoran flee to the surface and Taipu holds up a rock to help them get to the surface, when he gets weak. Just then, an Onu-Matoran is swallowed up by the water and Onepu pushes Taipu out of the way, causing the tunnel to collapse.

In the collapsed tunnel, Onepu looks around for Taipu, and they eventually findd each other. Taipu thinks he's blind, but Onepu says it is dark, that's all. When Taipu asks if all of the Onu-Matoran got out, Onepu says all but one, when the missing Onu-Matoran, Nuparu, appears and he uses his Lightstone and finds a Kranaless suit of Gahlok armor. Nuparu gets to work on the armor and transforms it into a device that can stand up to the Bohrok.

In the abandoned Onu-Koro, two Gahlok attack a wall of stone with Water attacks while Nuparu and Onepu and Taipu arrive. He fights using his machine and says "I'm an engineer, not a poet. Besides, a practical name will be easiest for you monsters to remember. I'll call it -- BOXOR!"

In a hut in Le-Wahi, two Le-Matoran, Kongu and Tamaru talk to Takua and Nuparu. When Takua asks how many are left, Kongu says Tamaru and him alone escaped. He sadly says that Le-Koro is lost and Toa Lewa is fallen, but Takua says that Lewa is safe, that Toa Onua saved him and they sent them back to help Le-Koro. Takua also says that these Boxors can defeat the Bohrok, but Kongu says not Nuhvok and looks to where Damek and Midak are transforming the empty Lehvak armor into Boxors. He says that Nuhvok are invincible in the jungle and only in baldland(Takua points out to Nuparu that he means open country, outside the jungle), the Boxors stand a chance. Takua says that Nuhvok are earth dwellers, at home in tight quaters, making Nuparu realize that Kongu is right about their chances, because they can't maneuver them in trees. Takua hatches a plan...

The next morning, Tamaru and Kongu race across Le-Wahi being chased by Nuhvok and Tamaru mocks them by showing his face behind his Rau. Nuhvok shoves their tree down when they jump into the open country. Matau and other Infected Le-Matoran follow them and the Nuhvok prepare to infect them with thir green Krana when Nuparu, Damek and Midak use the Boxors to capture the Infected Matoran and defeat the Nuhvok!

On the edge of Ga-Koro, Pahrak and a Pahrak Va look on the peaceful village, about to end the peace. In Nokama's Hut, Jala and Takua arrive and explain that Turaga Vakama has instructed him and his trusty Guard to defend Ga-Koro at all costs. When Nokama asks why Takua is here, he explains he is here with Nuparu and his Boxors that can stand up to the Bohrok. Just then, Kotu runs in and informs them that something has happened that she might want to see, and when they get in, they see Turaga Onewa come with the Po-Matoran into Ga-Koro. He explains they came there in desperation, because of the Tahnok taking over Po-Wahi, when Hahli says the Pahrak are entering Ga-Koro! Hahli, Maku and Kotu break the support, when the Pahrak get in! Maku is trapped, when Huki knocks it back and blocks off the support with an old fishing rod. They get safely in Ga-Koro.

That night, Maku sits beside Huki in the water and wonder where the Pahrak have gone. Maku believes they have gone home, but Jala points out that once Pahrak have got a problem, they don't stop until they find a solution. Just then, the statue of Gali's Kaukau smashes and the Pahrak advance into Ga-Koro via the wreck!

The next morning, Pahrak attack Kotu, are held off by Kai and trap Huki and Maku! Nuparu and Damek try to stop them with Boxors, but they are thrown off by a Pahrak! Luckily, Maku and Kotu save them and the Pahrak can't get to them, so they are trapped, but safe(unless Huki would like to swim for it, as suggested by Maku). Just then, a Pahrak Va appears and replaces their Krana with Krana Vu and it allows them to make it across and attack them! On the other side, Takua and Jala are cut off from the others, when Takua hatches a plan. Huki, Maku, Kotu, Hahli and the two Turaga try to fend them off when Takua jumps on the other side using a reed and says "Touch one mask on their heads, beasts, and you'll have to deal with ME!"

Takua, protecting the Ga-Matoran from last episode, tells them to get on with destroying them or shoo! Just then, Gali's Nuva Symbol a﻿ppears on the Ga-Suva. Maku asks Turaga Nokama what's happening, and the wise Turaga realises this means the Toa have captured the Bahrag. The symbol causes the Pahrak to shut down, and the other Nuva Symbols shut down all the other Bohrok on Mata Nui, ending the Bohrok Invasion.

Later, Jala and Takua dump the last of the Krana into the Krana Pits. Nuparu then has a reprogrammed Pahrak trap them underground with a boulder. Huki shows the Po-Matoran have invented a new type of Kolhii using the old fishing rodsused by the Ga-Matoran. He wants to go back to Po-Koro with Onewa, when Maku pulls him away for his swimming lesson! Jala says he shall be going back soon, when Hahli puts a flower on his Noble Hau, making him realize he can stay for a bit, so he goes of swimming with Hahli. Takua looks at the sun, glad the wars with the Bohrok are over. 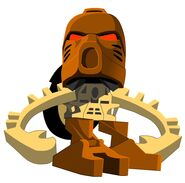 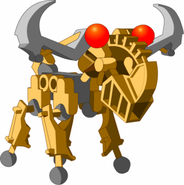 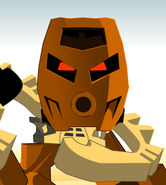 Retrieved from "https://bionicle.fandom.com/wiki/Bohrok_Online_Animations?oldid=178827"
Community content is available under CC-BY-SA unless otherwise noted.