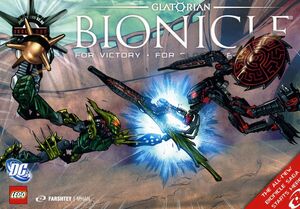 Sands of Bara Magna is the first comic of 2009, illustrated by Pop Mhan.

Berix was running from Fero and Skirmix, who were chasing Berix with the intent of killing him. Fero was about to attack him with his sword, but a Thornax hit him, damaging his hand. Gresh appears, telling the Bone Hunter to leave Berix alone. Fero tells Gresh that it is futile challenging him, but Gresh disagrees as Tarix and Strakk appeared from behind, surrounding Fero and his Rock Steed. Fero escaped, however, using Skirmix to trample Strakk. Berix was grateful to the three Glatorian for rescuing him, but said he had nothing to offer them in return. Although Strakk was unhappy about this, Tarix and Gresh told him not to worry, saying that they "did this one for fun.". Strakk later asked Berix why he was so far from his home village. Berix explained he was looking for armor and other items that might help him in the arena. Strakk told him he'd need more than armor if he really was to fight in the arena, but stops when he notices a pack of Vorox attacking them. After a brief but furious fight, the Vorox retreat. Berix noticed they had been signaled to retreat by a Glatorian far away. Tarix told him that Glatorian was Malum who had been exiled to the wastelands for his crimes in the arena. Gresh reminded the group that they were due in Vulcanus, while Berix was struggling to lift up a bladed staff that the Vorox had left behind. Later in Vulcanus, Metus and Raanu were arguing. Raanu had asked for a Glatorian to fight the Skrall as they had taken over Vulcanus' Flame Geysers, and Vulcanus had no Glatorian to defend their claim after Malum's exile. Metus told him no Glatorian would ally with Vulcanus if it meant fighting a Skrall. Afterward, Tarix asks Gresh if he was a fighting a Skrall, and Gresh states that his fight with the Skrall will decide who, Tesara or the Skrall, will get a coveted oasis. After a short battle, Gresh lost. The Skrall attempted to kill Gresh, telling him to "meet the fate of the defeated", but is stopped as Tarix blocks the attack and warns the Skrall that continuing would be challenging the others to a fight. The Skrall left and headed to a cave where he spoke to a mysterious being. The being told him that a food caravan was heading to Tajun in a week, and that if the Bone Hunters raided it, Tajun would have to challenge other villages for food, which it would fail to do. The Skrall told the being to stop pretending to be a Skrall as he knows he is not, but the being told him to go back to Roxtus and tell Tuma about it, before they are seen together, which the Skrall did, relaying their entire conversation to the leader of the Skrall. Tuma ordered the Skrall to discuss it in front of an Agori, then "accidentally" let him go. The Agori would surely be captured by the Bone Hunters as soon as he reached the open desert, and tell them everything in the hopes of release. The Bone Hunters would then act on what they knew. Tuma then told the Skrall that he plans to openly conquer Bara Magna.

Retrieved from "https://bionicle.fandom.com/wiki/Comic_1:_Sands_of_Bara_Magna?oldid=194108"
Community content is available under CC-BY-SA unless otherwise noted.