Kanae Bay was where the jungle region of Le-Wahi met the sea surrounding the island. 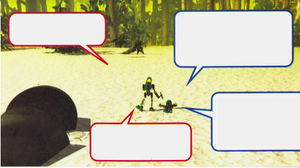 Kanae Bay first came into being when the Great Spirit was rendered unconscious by a virus created by Makuta Teridax. After Takua unwittingly summoned the Toa Mata, the shores of Kanae Bay were where the Toa Canister of Lewa washed up.

At one point, Kanae Bay also became the site of Turaga Matau's attempt to help the Le-Matoran get over their fear of water. This attempt ultimately proved fruitless, and Matau ultimately concluded that the jungle was better than the sea anyway.

In preparation for the awakening of Mata Nui, the Toa Nuva were forced to release the Bohrok swarms on the island, so that the landmass would be free of any obstructions when Mata Nui awoke. What was left of Kanae Bay broke apart and sank to the bottom of the sea when Mata Nui finally rose from his slumber.

Retrieved from "https://bionicle.fandom.com/wiki/Kanae_Bay?oldid=196277"
Community content is available under CC-BY-SA unless otherwise noted.