LEGO BIONICLE: The Journey to One is a Netflix exclusive animated television series, and the first BIONICLE television series to be produced. Initially revealed toward the end of 2015 in a press release detailing Netflix-exclusive content to be released in 2016[1], the first half of the series premiered on March 4, 2016 while the second half premiered on July 29, 2016. Multiple screenshots, concept arts and character teasers have been released on the BIONICLE Facebook page as well on LEGO's YouTube channel. The series consists of four episodes, around 21 minutes in length each plus a prologue episode 12 minutes long, and story consists of the 2016 storyline.

1st half of the episodes

The 6 Toa are headed on a quest to find their respective elemental creatures which will help them get to Mask of Control guarded in the Labyrinth of Control. Umarak the Hunter is their main antagonist who is out to get the Toa and get Makuta's mask for him.

2nd half of the episodes

After Umarak put the Mask of Control on his face and got taken over by Makuta, Umarak's main goal is to open a portal to the other world. With darkness rising, Ekimu the Mask Maker goes on a quest with the 6 Toa to stop Umarak once and for all after using his powers to turn him into a Toa-like being.

Six legendary heroes find themselves on an epic quest as they harness the power of nature's elements to defeat the forces of evil.

Official Poster for the July episodes.

Official Poster for the March episodes. 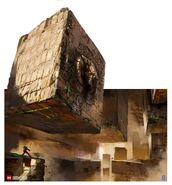 Labyrinth inside - floating cubes.
Add a photo to this gallery

Retrieved from "https://bionicle.fandom.com/wiki/LEGO_BIONICLE:_The_Journey_to_One?oldid=186872"
Community content is available under CC-BY-SA unless otherwise noted.