The Mask of Ultimate Power was a mask forged by the Mask Maker Makuta, in a bid for power after his jealousy of Ekimu's work being more recognized than his own and his previous failure to outdo him had reached its peak.

It was a sacred law that no mask could contain the power of more than one element, otherwise it would become too strong and dangerous. Ambitious to outdo his brother, Makuta broke the law by forging a mask that contained the power of all six elements, which he called the Mask of Ultimate Power.

Makuta attempted to demonstrate the mask in the Capital City, but upon putting it on it took control over him and began to destroy the island. The mask was knocked off of Makuta's face by Ekimu. Because the mask could not contain its own power, it was destroyed, sending a shockwave across the entire island that sent Ekimu and Makuta into a deep slumber. The destruction of the mask also opened a gate to the Shadow Realm which trapped both Makuta and the city. The pieces of the Mask of Ultimate Power were scattered across the island in the explosion, hidden alongside the Mask of Control and the Mask of Creation.

After taking control of Umarak, Makuta instructed him to find pieces of the Mask of Ultimate Power and bring them to the Great Crater, the former site of the Capital City, in order to free him. During the ritual to open the portal, Uniter of Water Gali attempted to steal one of the pieces, which led to Makuta pulling her into the realm. Makuta's attempt to free himself was ultimately thwarted when the Toa combined their elemental powers to reseal him.

In the Shadow Realm, Makuta wore a mask which resembled a shadowy duplicate of the Mask of Ultimate Power. 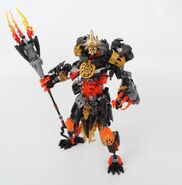 The complete cancelled model with the Mask of Ultimate Power

Silhouette in "The Legend"

Makuta forging the mask
Add a photo to this gallery
Retrieved from "https://bionicle.fandom.com/wiki/Mask_of_Ultimate_Power?oldid=200544"
Community content is available under CC-BY-SA unless otherwise noted.