The Matoran Alphabet was the system of written language used mainly by Matoran and several other inhabitants of the Bionicle universe. It is similar in most respects to our own, using a system of circles, dots, and lines to convey the characters in the Latin alphabet.

On Voya Nui and Mahri Nui (most likely because they were once connected) hexagons were used in place of circles and the letter K was slightly modified and resembled the latin letter more than the other version. However, it is unknown if this is merely a cosmetic change, or practical.

Matoran had their own numerals as well. Each of them have a central circle with line segments jutting out of them, but starting with the numeral six, there are two central circles rather than one. Zero has one central circle.

Here is the guide: 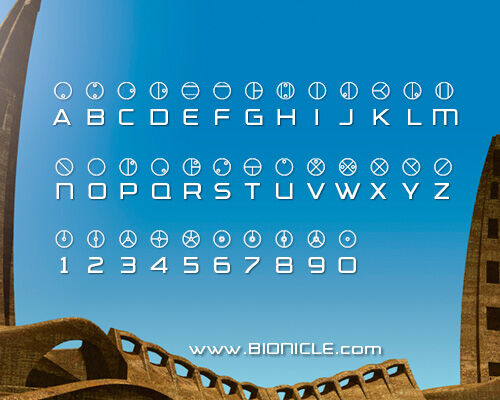 Note that some of these are not completely canon.