The BIONICLE Wiki
Register
Don't have an account?
Sign In
Advertisement
in: Matoran Universe, Locations, 2004,
and 5 more

The Matoran Universe was created by the Great Beings over 100,000 years ago as a giant mechanical being, who set Tren Krom to watch over it. When Mata Nui was created, he was set to watch over the universe, while Tren Krom was exiled to a barren island. Mata Nui's mission was to learn about the external universe and then return to reunite Spherus Magna.

The Brotherhood of Makuta and the Hand of Artakha were created, the former to create Rahi, and the latter to enforce order in the Universe. But the Hand didn't last very long, and was replaced by the Toa. The Order of Mata Nui was also created around that time, to carry out Mata Nui's will. The League of Six Kingdoms once tried to overthrow Mata Nui and seize control of the Universe, but were defeated by the Brotherhood, a member of which realized that Mata Nui could be overthrown.

This Makuta, Teridax, soon took control of the Brotherhood and devised a plan to control the Universe. 300 years before the Great Cataclysm, the Brotherhood infected Mata Nui with a Virus that gradually put him asleep. When Mata Nui finally fell into a slumber, he crashed onto Aqua Magna and as a result of this a great earthquake shook the Universe contained in the robot. This event is known as the Great Cataclysm.

After the Great Cataclysm, one island inside the robot escaped from inside and shot to the surface of Aqua Magna - Voya Nui. Mata Nui was also dying and was close to death when the Matoran escaped Metru Nui with the help from the Toa Metru. A thousand years later, six brave Matoran, later known as the Toa Inika, were sent to Voya Nui to recover the Kanohi Ignika, and heal Mata Nui. However, after they destroyed the cord connecting Voya Nui and Mahri Nui, Voya Nui collapsed and crumbled back into the Matoran Universe. The Ignika transformed the Toa Inika  into Toa Mahri, and they set out to find the Mask of Life, as it vanished into the sea. However, they were too late, and Mata Nui died. The Universe would have been completely submerged, but Matoro sacrificed his life to revive Mata Nui using the Ignika.

Despite Matoro's efforts, life in the Universe was still in danger, because the the Brotherhood found a way into the Universe Core. A countdown was then triggered in the Ignika, at the end of which it would drain the life of all beings in the Universe. The mask soon realized it was a threat to the Universe, and eventually sacrificed itself and the body it created to fully awaken Mata Nui, by doing what would have taken the Codrex several days to do. When Mata Nui awoke, Makuta Teridax banished Mata Nui's spirit out of his body and took control of it himself, successfully gaining control of the Matoran Universe. Mata Nui's spirit was fused into the Ignika, which was itself banished from the Matoran Universe. After Teridax finally gained control over the Universe he traveled to Bara Magna to fight and destroy Mata Nui. After battling Teridax in an older, and smaller, prototype robot, he was finally killed by a small piece of Bota Magna, which had broken off during its flight through space. The Matoran Universe fell on the now recreated Spherus Magna. The inhabitants escaped and made new lives for themselves on their new home.

The Matoran Universe is comprised of various domes; massive, individual caves separated by gates with oceans and islands of their own. Also, during the Great Spirit Robot's stay on Aqua Magna, some new locations were made on Aqua Magna's surface:

Mata Nui: An island that was created on Aqua Magna's surface by a malfunction in Mata Nui's camouflage system when he crash landed during the Great Cataclysm. Due to a leak of Energized Protodermis, the island was covered in plant life. After the Matoran population of Metru Nui was placed into Matoran Spheres, the Toa Metru brought them to live there (who gave up their Toa power to be Turaga and to release the Matoran). Makuta Teridax also went with them, and started to torment the Matoran with mind controlled Rahi. He also released the Bohrok swarms on Mata Nui in order to recuperate. Eventually, the Matoran went back to Metru Nui, and the Toa Nuva released the Bohrok swarms as part of a list of necessary things to do in order to awaken the Great Spirit. When Mata Nui awakened (with Teridax's mind), the island, which had been completely made barren, was destroyed by the Great Spirit Robot's head rising up and pushing through the land above, shattering it apart.

Voya Nui: An island that was created during the Great Cataclysm. It was originally part of the Southern Continent, and it was the area where the Kanohi Ignika was kept. Many caves exist beneath the island. During the Great Cataclysm, it rocketed out of the universe, and was floating on Aqua Magna. Molten protodermis created a new but unstable landmass on the shore, and a city was settled on it called Mahri Nui. It returned to its orignial position on the continent after the Toa Mahri destroyed the cord.

Mahri Nui: A piece of land that broke off of Voya Nui and sank into the sea. The surviving Matoran villagers lived in buildings surrounded by giant air bubbles harvested by Hydruka.

Inside the Matoran Universe

The Matoran Universe houses several locations. They are: 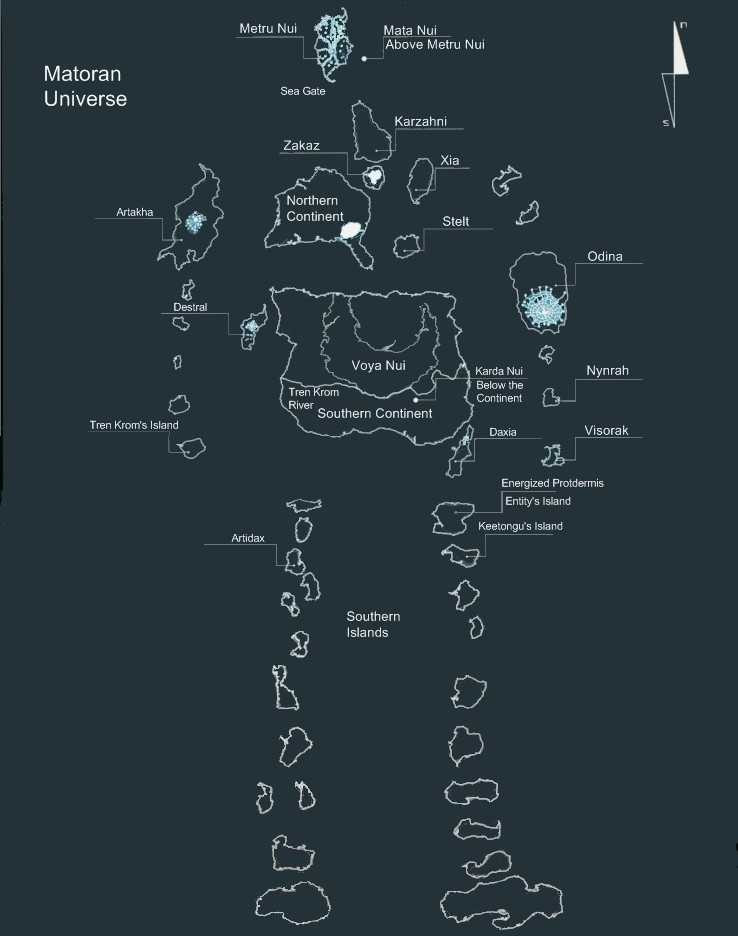