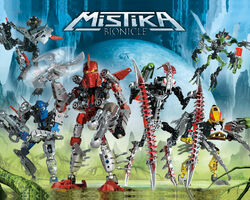 Mistika was the name of the 2008 summer set wave, which consisted of the Toa Nuva and Makuta, and was set in the Swamp of Secrets. Mistika means "Spirits of the Mist" in the Matoran Language. The six Mistika were Tahu, Gali, Onua, Krika, Bitil and Gorast. Both sides carried tools known as the Nynrah Ghostblasters, and each Mistika could combine with a Matoran similar to the Phantoka. Takanuva was also known as one of the Mistika Toa.

Main wallpaper of the series.

Bitil
Add a photo to this gallery
Retrieved from "https://bionicle.fandom.com/wiki/Mistika?oldid=196416"
Community content is available under CC-BY-SA unless otherwise noted.