Po-Wahi was the Stone region on Mata Nui. A large desert area, it was home to Po-Koro, which the Po-Matoran, Turaga Onewa and Toa Pohatu called home.

Po-Wahi's terrain was largely formed by the Motara Desert, a massive expanse of sand that covered a large part of Mata Nui's northern area. Where there was not sand, there were steep sandstone cliffs, mesas and canyons. Several paths had been carved by Po-Matoran to guide travelers through Po-Wahi; one known path led to Po-Koro's main entrance, another led to an underground highway into Onu-Koro, a third path led to Po-Koro's coastline, Leva Bay, while the fourth led into the Quarry.

The rocky landscape of Po-Wahi was also dotted by a number of tunnels and caves on its outskirts; one such cave was the location where the Turaga of Mata Nui hid all the Kraata they had captured on the island and placed in stasis. Another one led into the Bohrok Nest, and was where the Bohrok-Kal went to free the Bahrag.

Po-Wahi was created when Mata Nui crashed on Aqua Magna. His malfunctioning camouflage system formed an island formed over his face, and energized protodermis created the landscape of the island.

After the Toa Metru brought the Matoran to Mata Nui, they scouted the island for areas where villages could be built for the rescued Matoran population. Onewa happened upon this region made entirely of sandy desert and rocky canyons. He dubbed this region of stone "Po-Wahi", and chose Po-Wahi as the perfect site to build a village for the Po-Matoran. After sacrificing his Toa Power to revive the Matoran, the now-Turaga Onewa led the Po-Matoran to the site he had found before, and together they constructed the village of Po-Koro, which they would come to call home for centuries to come.

When Pohatu arrived on Mata Nui, his canister washed up on Po-Wahi's Leva Bay; from there, he ventured deeper through Po-Wahi's deserts, and ultimately finding Po-Koro. There, Onewa told Pohatu about his quest to find his Kanohi and defeat Makuta Teridax. 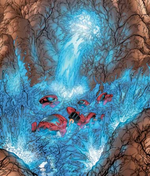 During the Bohrok invasion, Po-Koro was attacked by Tahnok. The Toa managed to trap a few in Tiro Canyon, but another swarm attacked Po-Koro, and the Stone. After the Toa Mata sealed the Bahrag and became Toa Nuva, Po-Koro was reconstructed and a Nuva Symbol appeared over Pohatu's Suva.

A Bohrok-Kal later arrived in the village and stole Pohatu's Nuva Symbol, leaving him without his elemental powers. The symbols were later recovered by the Toa Nuva and returned to their respective Koro.

After the path to Metru Nui was revealed, Po-Wahi was abandoned. The Bohrok swarms were later unleashed again, and everything in Po-Wahi was leveled.

When Mata Nui was reawakened, his face broke through the island of Mata Nui, destroying Po-Wahi.

Retrieved from "https://bionicle.fandom.com/wiki/Po-Wahi?oldid=195664"
Community content is available under CC-BY-SA unless otherwise noted.