When Teridax took over Rahi with Infected Masks, Sand Tarakava were given infected yellow Rurus. They were the mortal enemy of the Kikanalo species.

The Sand Tarakava was planned to be a set, but it did not make it past the prototype stage. Five prototypes have been rumored to exist, though only one is known to exist, belonging to Mark Durham. The set was designed before the normal Tarakava set and was made as a prototype for said set. The yellow Ruru is the only prototype piece on the set. 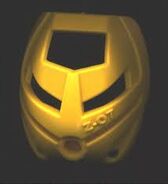 Prototype Ruru for the Sand Tarakava

A side view of the Sand Tarakava prototype
Add a photo to this gallery
Retrieved from "https://bionicle.fandom.com/wiki/Sand_Tarakava?oldid=191752"
Community content is available under CC-BY-SA unless otherwise noted.