Spherus Magna was the homeworld of the Great Beings, Agori, Glatorian, Skrall, Vorox, and Energized Protodermis. It was rebuilt later by Mata Nui with unintentional help by Makuta Teridax.

Sometime before 100,000 BGC, the Great Beings appeared on Spherus Magna. A glowing, tentacled being named Annona tried to eat their dreams out of them, but the Great Beings managed to take Annona's dreams again, using these dreams as inspiration to create things. Out of fear for the Great Beings, Annona hid underground, eventually finding the Iron Tribe and sapping out their dreams, an event later named the Dreaming Plague. There were few survivors after this, and these few were shunned from the other tribes, since they thought these tribesmen were infected with the disease.

Energized Protodermis later forced itself from the core of Spherus Magna to the surface. It was discovered by Spherus Magna's inhabitants, some of whom touched the substance and were destroyed. Later, another villager used a tool to investigate it, only to have it transformed into a trident. This made these villagers discover the potential of Energized Protodermis, and a war arose over the possession of it. These inhabitants were unaware that the substance spread across the planet and threatened to break the planet up during the war. Glatorian were soldiers in this war. While they fought, the Great Beings began investigating the Protodermis.

The Great Beings kept themselves neutral during the war, and used the Energized Protodermis to engineer a synthetic version simply named Protodermis. This powerless version was used to create a synthezoid named Mata Nui. Before creating Mata Nui, however, they created a prototype, which, due to its instability, exploded, causing its separated body parts to fly across the planet. For five years, the Great Beings' creations, the Matoran, worked in the "darkness" of Spherus Magna, unaware of their labors. The Great Beings themselves forged the Kanohi Ignika, and then awakened Mata Nui and sent him off to accomplish several tasks.

Trying to stop the war, the Great Beings created the Baterra, meant to attack anything carrying a weapon. However, they only mainly fought the Skrall in the northern Black Spike Mountains. A Skrall named Branar discovered that the Baterra were robots with shapeshifting powers, but, even though they knew this, still lost and were forced to retreat south, eventually finding Roxtus.

Despite the Great Beings' intervention, they were unable to stop the impending disaster. Spherus Magna was stricken by a cataclysm known as the Shattering, cracking the planet into three pieces. The desert area, along with the Great Volcano and some more, became a planet later known as Bara Magna. The ocean of Aqua Magna became a moon of Bara Magna. The jungle of Bota Magna, along with the Northern Frost and some more, also became a moon of Bara Magna (Kiina later blamed this on the Great Beings).

Mata Nui, in the prototype robot body, attempted to pull the moons of Bara Magna together, but Makuta Teridax stopped him. During the ensuing battle, Teridax tried to destroy Bara Magna with a gravity blast. Instead, the blast pulled Aqua and Bota Magna back to the planet's surface. A broken off piece of Aqua Magna hit Teridax and killed him. Once Spherus Magna was re-fused, Mata Nui used life energy to make the planet a thriving world. Mata Nui's prototype robot crashed to the ground, but his spirit went back into the Ignika. Mata Nui, having fulfilled his destiny, left the planet, after bidding his people farewell.

When Mata Nui took over the Prototype Robot, He re-formed Spherus Magna, killing Teridax in the process. The destroyed Great Spirit Robot was evacuated, therefore letting the Matoran out onto Spherus Magna. They tried to live in peace with the Agori. Onua, under orders from Tahu, later sent Chiara, Zaria, Orde, and Gelu on a mission to find the Great Beings. However, the Toa were unaware that Marendar had been activated, and was going to persecute them. Kopaka and Pohatu were searching for Lesovikk when they found Karzahni's body in the Iron Canyon, Lesovikk's blade lying nearby. Around this time, the Golden Skinned Being was completing a fortress. Tahu and Gali, with a search party, traveled north to find a location for New Atero.

The Great Being search party got to Bota Magna before being ambushed by Vorox, led by alpha male Kabrua, who retained sentience by living on Bota Magna while the planet was shattered. The Vorox then captured the team and brought them back to their city.

Annona later resurfaced on Spherus Magna, followed by Sahmad, Telluris, and Metus, who was an Agori again. Sensing her next meal, Annona teleported to the gold being's fortress with the three Agori. Annona then floated up the beach cliffs and distracted the guards with illusions. The gold being came out of the fortress and, upon hearing Annona wanted to eat the dreams out of the beings there, attacked her.

Tahu and Gali later returned, having not found a suitable location for New Atero. Kopaka and Pohatu later told them of their story and Tahu asked them to travel north. After journeying for a few days, they, along with another being, Gaardus, heard a scream, had images implanted in their minds, and found the splattered body of Tren Krom lying across the ground.

On the Spherus Magna of this dimension, there are gigantic organisms and trees. The Great Beings here constructed the Matoran as large beings resembling the main universe's Toa so they could perform labor in villages. In contrast, the Toa were given the smaller stature of the main universe's Matoran for added agility. They were also granted Elemental Powers and Kanohi powers. The first Toa were created to repair the planet and protect it from the shattering that the Great Beings felt was imminent after Energized Protodermis was discovered and the war over this resource began. The Toa were sent underground with containers to hold the Energized Protodermis and the duty of repairing all the planet's damage. After five years, the task , dubbed the Melding, was successfully completed.

Ko-Matoran Mazeka and Shadow Matoran Vultraz found themselves passing through a portal during their conflict in Karda Nui, emerging into this alternative universe's Spherus Magna. Here, the two Matoran discovered a gigantic organism capable of firing razor sharp crystals and turning objects into energy, and a massive tree banded in gold metal. The two then met a pair of beings resembling a Ga-Matoran and a Toa of Water. When Mazeka inquired as to their whereabouts, the Matoran introduced herself as Toa Macku, and stated she was pleased to meet a "hero of the Melding" (since Mazeka and Vultraz fit her understanding of Toa rather than mere Matoran).

The four then traveled to a village Ga-Koro as Macku related the story of The Melding. She also revealed that her companion the Ga-Matoran, was actually Helryx.

After Macku had finished her tale, Mazeka informed her that he and Vultraz were not from Spherus Magna, and that they needed a way home. Macku eventually suggested that the pair visit the Great Beings themselves, who would be able to help them. Macku then brought the two Matoran a guide, who turned out to be Makuta Teridax. Clad in white armor, the Makuta race here was loyal and fully dedicated to the service of light and of the Great Beings.

Teridax led the two Matoran to the fortress of the Great Beings, where they and the Great Beings forged a deal. Vultraz was to be taken away to be tested, to see why he was so full of shadow, and Mazeka was to returned to the Matoran Universe, exchanging Vultraz with a being from alternative universe. Mazeka chose white-clad Teridax, and together, they prepared to return.

After Makuta was defeated, the inhabits of the Matoran Universe evacuated their homes and came to live on Spherus Magna after it was reformed by Mata Nui.

Concept art of the Shattering. 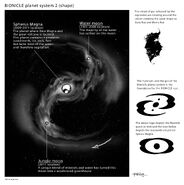 Concept art of post-shattering Spherus Magna.
Add a photo to this gallery
Retrieved from "https://bionicle.fandom.com/wiki/Spherus_Magna?oldid=197581"
Community content is available under CC-BY-SA unless otherwise noted.