Umarak the Hunter is an unknown figure bent on hunting the Elemental Creatures. After stealing the Mask of Control and disobeying Makuta's orders, he put the mask on his face, causing Makuta to take complete control over him and transforming him into Umarak the Destroyer.

Umarak has been around for as long as the Creatures, born from the shadows, his sole purpose is to hunt them and drain their powers.

Upon Makuta's orders, Umarak hunted for the Mask of Control, which led the hunter to search for the Elemental Creatures, the only beings with knowledge of the mask's whereabouts.

While searching for Uxar in the Region of Jungle, the hunter was confronted by Lewa. The Toa was victorious, but not before Umarak briefly united with Uxar and caught a glimpse of the Labyrinth where the Mask of Control was located. Later, Makuta contacted the hunter, and the latter informed him that in order to find the Mask of Control, uniting with an Elemental Creature was essential.

Soon after, Umarak ambushed the Toa to observe them, and discovered that Pohatu and Ketar had the weakest bond of Toa and Creature, making the Creature of Stone his target. Once the Toa entered the Labyrinth of Control, Umarak gave pursuit and stalked them from the shadows. When the Toa entered the chamber the Mask of Control was hidden in, Pohatu stayed behind for a few moments, reluctant to unite with his creature. Umarak was then able to ambush him, forcibly uniting with Ketar and allowing the hunter to enter the chamber. After dealing with the Toa, the hunter secured the Mask of Control and fled the labyrinth. Pohatu gave pursuit, but, despite his best efforts, the Toa could only make one choice: Save Ketar from falling to its death, or stop Umarak. Pohatu chose to save his Creature, allowing Umarak to flee into the shadows.

Makuta contacted the hunter again, and the former informed Umarak that he would now serve the Mask Hoarder. Although he protested heavily, after donning the Mask of Control, Umarak fell under Makuta's control, and the former transformed in to the Destroyer.

Later, Umarak was ordered by Makuta to raise an army of beasts to distract the Toa while he looked for the pieces of the Mask of Ultimate Power. He was successful in finding the pieces, and went off to the Black Crater to perform a ritual to summon Makuta. Gali tried to stop him, but she ended up getting banished to the Shadow Realm in the process. During Makuta's arrival, Umarak's energy was drained from him. As a result, his physical form disintegrated, ultimately killing him.

Umarak was equipped with the Mask of Shadows, giving him several shadow-based abilities. One of these was to sneak into the shadows, which he used to both travel around Okoto and sneak up on his enemies. He could also create clones of himself and Shadow Trap to assist him during battle and catch enemies, respectively. Finally, Umarak could use the shadows to restrain his enemies. However, Umarak's shadow powers are only effective in shaded areas, and as such he cannot use them and is weakened when surrounded by light.

Umarak was armed with a massive Bone Hunting Bow Shooter and a blade, and wears the Mask of Shadows, giving him his abilities.

"Darkness is rising, Toa. You can not stop it."

-Umarak to Lewa, Quest for Unity

"Feel that? It is the power that you squandered. Now, it is mine!"

-Umarak to Pohatu, Trials of the Toa

-Umarak to Makuta, Trials of the Toa

Umarak in his Destroyer form comes in set number 71316, Umarak the Destroyer. The set contains 191 pieces.

Umarak in his previous form. 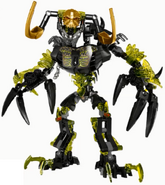 Mask of Control after Umarak put it on his face.

Behind of his Destroyer form box.

Combo model with Umarak and the rest of the Beasts.

Umarak in the Main Summer Poster.
Add a photo to this gallery

Retrieved from "https://bionicle.fandom.com/wiki/Umarak?oldid=189998"
Community content is available under CC-BY-SA unless otherwise noted.