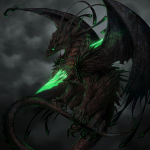 Quimulot is a Toa Kaita made up of Toa Kaita.

Quimulot was only formed once, to find and deal with rampaging Marendar following the Battle of Bara Magna. He later went to New Atero, where he defused and became the resident Toa Team.

Quimulot possessed great physical strength, being between Nocturn and Mata Nui in terms of strength; and great mental strength, being able to resist the influence of Kanohi such as Volitak, Huna, Komau, Olisi, a Mask of Charisma, or a Mask of Incomprehension. Being a Kaita, he possessed the elemental powers of his component Toa: Plasma, Fire, Lightning, Water, Air, Plantlife, Sonics, Magnetism, and Gravity. He wore the Kanohi Torumin, which was a fusion of a Calix, a Kualsi, a Mask of Intangibility, a Zatth, a Mask of Rahi Control, a Faxon, a Hau, a Matatu, and a Mask of Density Control. He also possessed large, scythe-like claws that were part of his left hand, and could direct his elemental powers. In his right hand he had a modified Zamor launcher that could shoot three Zamor at once. His Zamors, when they struck something, caused it to instantly teleport to the location it was struck at at the end of every minute. This effect could be removed by being struck again, or by using a sufficiently powerful alternate means of teleportation such as an Olmak. Botar's species were immune as they could naturally teleport. It is unknown if Kapura is immune, however since his technique likely does not employ teleportation he probably is not immune.

Retrieved from "https://bionicle.fandom.com/wiki/User:TessilnTheMaskMaker?oldid=190501"
Community content is available under CC-BY-SA unless otherwise noted.