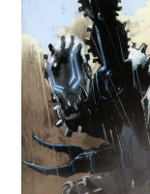 Re: your confusing me... Edit

sorry, I meant to say avatar, anyway i looked very quickly on a blog post you had commented on and i thought i saw your name next to my avatar, sorry thought i turns out i have just looked too fast and misataken it. cool Baterra MOC by the way!

You spammed on the Gadunka page. Do this again and you'll be blocked.

Um... No. He didn't spam. He simply made a mistake. (Alternatively, the Rich Text Editor messed up, if he has enabled it)

LewaMataToaOfMischief referred to the fact that you messed up the infobox, or at least I assume so. Anyways, regarding Gadunka being eaten by a Takea, I looked it up on another BIONICLE Wiki, and I assume it was said in a book or something. I've not read any pre-2009 BIONICLE books, except one from 2003, I think.

How did you get that? Do you own a copy of the graphic novel?

OK, thanks for telling me.
Also, no, I'm sorry, but you could not post the MoC on our Baterra article. However, I'm sure something like that could be arranged on BIONICLE Sets and Creations Wiki, if you're interested.

Dude You're on! how about we have Mazeka be Question asker and referee? Turaga Lhikan

Where are you? Edit

Dude,where are you I don't have all night I might not even have enough time to do the entire thing tonight. J. Whitaker

Tone it down in future, okay? Edit

In the future, please use a bit of restraint when ranting on other people's talkpages, however annoying they are being. ;-) Thanks, Toa Roden

It can't be Tuma55, because he's been given a wiki-wide ban. But I still can't quite believe we've seen the last of him. Toa Roden

Technically, yes. But there is the possibility that he was using a public computer, as Tuma55 is far from stupid. But if you wish, I shall extend the ban. Toa Roden

If you're wanting to get this over with so that I can forgive you then no. Because I try to like all users and then there's the spoiled ones. I dont like people that anger me for the first time.

Sorry for not forgiving you. I've just been through alot and I thought you did mean me. So I'm sorry. By the way, do you think the best idea to help out this wikia is to vandalize Tuma55, Duncannuva and Skrall Team Wikia as anonymous user? They deserve a taste of their own medicine.

I spoke to Bandipedia's supposed "leader". I sent him this message about Komodo55 (don't delete it, in case Komodo deletes it on Bandipedia ... than I still have this message for proof:

Hello - I'm Starscream7. No - I'm not here to contribute, sorry. I'm here to bring you some bad news. One of your site's bureaucrtas - Komodo55 - know him? Did you know that he's a vandal? Do you want proof? We've got his mugshots on another site. Did you know that he's made many dupe accounts? Do you want proof? Did you know that he created a website called the Tuma55 Wiki (a vandalism site) and said extremely disrespectful things about other users? I've got proof - and you may want to look closely. You're really working alongside a devious vandal. I don't care how hard he's contributed. He's been a vandal. He's planned a vandalism attack on The Bionicle Wiki alongside Vakamatrugaoffire - luckily, it never happened ... yet. You may want to reconsider keeping him as a bureaucrat after looking at these links:

All you need to know is here and here. SS7 was obviously lying when he left that message to Kazi22 (Since he was blocked on Brickipedia, he must have vandalized there).

My guess is that his vandal edits to Brickipedia were deleted. I know the admin who blocked him, and that block must have been justified. - Mata Nui   Talk 08:12, April 26, 2011 (UTC)

Sorry to butt in, but that's the thing- he hasn't changed. He just says he's changed. I personally agree with Mata Nui's decision, given SS7's background. Would you let a proven vandal and troublemaker run around on your wiki, causing trouble (like with Tuma55) and trying to run the place? No. And I honestly think SS7 shouldn't be allowed back, after he tried to lie about the origin of his dupe account to Kazi -Monasti(Talk) 20:12, April 26, 2011 (UTC)

Hates a strong word. I've let him back into Custom Hero Factory Wiki because he's never caused trouble there. And most of the time, I try not to let my personal opinions cloud my judgement of whether people should be banned or not. Granted, sometimes it doesn't work, but still. If it was any other member, and they said that, I would have the same opinion. Personal opinion or not. -Monasti(Talk) 20:31, April 26, 2011 (UTC)

The fact that he lied to Kazi22 makes me believe that he didn't really change. However, I am in contact with him, and we are discussing this. If he can prove that he did not, in fact, intend to vandalize this wiki, then he should be unblocked, and his honor should be restored. - Mata Nui   Talk 14:31, April 27, 2011 (UTC)

I didn't say that he vandalized here. I didn't say that he vandalized anywhere after he "changed". I said that he was a liar, and you can't deny that.
Anyways, I can't unblock him now. I follow orders too, and at least for now, SS7 will remain blocked. However, I am now certain that he did not intend to vandalize this wiki. - Mata Nui   Talk 15:32, April 28, 2011 (UTC)
Just to make it clear, there is nothing I can do about it anymore. I have changed my mind; I don't think that SS7 should remain blocked, but I am not the highest in command here anymore.
Oh, and if you have a problem with me or my ways of administrating, than you can say it to me directly. Don't talk behind my back. - Mata Nui   Talk 15:46, April 28, 2011 (UTC)

Well, when I look at it now, it doesn't seem like you meant any offense, but it did look like you did when I first saw it. Anyways, I was referring to the following:

"...you shouldn't mention it to TBW's admins, because they will always go and try to find out more about it."

"I did send a message to Mata Nui about it, but he doesn't seem to understand consequences already happened."

But when he was blocked, the reason given was "You really need a better hobby." (http://lego.wikia.com/index.php?title=Special:Log&type=block&page=User%3AThe+Vandal+Master). It's the typical comment when banning a vandal.
Anyways, I guess I should just ask Ajraddatz about it. Thanks anyways. - Mata Nui   Talk 21:24, April 29, 2011 (UTC)

Do you know how to gain access to IP addresses?! If you do please help me!

Yeah. He placed the comment in and I got angry at you and Mazeka369!

So what do I do now?

Can you specifically tell me which part that area is?

Kopeke6991 (Send my messages to my talkpage) (And it's still me)

Tuma55/88 has stopped working for the Duncannuva Wikia because I have stepped down from becoming a rollbacker.

Good news - I got unblocked here :) Glad to be back!

Hello. I was wondering if you had the Graphic novel 8? If you do, can you tell me if the picture I added to the baterra page is from it? I ordered it a couple weeks ago so if you don't answer in the next few days that's okay, I'll probably already know by then. Thanks for you time! --BionicleDude 17:59, February 21, 2012 (UTC)

Retrieved from "https://bionicle.fandom.com/wiki/User_talk:Baterra1202?oldid=155143"
Community content is available under CC-BY-SA unless otherwise noted.