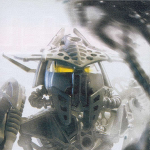 WARNING:First I want to say that I am Bulgarian and I'm still studing English, so if i have mistakes don't think I'm illiterate.

I first heard for Bionicle in 2008 from my big brother's toys (Lewa). When I get into the website I loved Bionicle from the first view. I was six or seven years old and I didn't realize that I had to find out Bionicle earlyer but now I sorry about that. I am the only Bionicle fan in my town but I don't have so many sets from Bionicle because in my small town there is just one big toyshop(now they are two but they sell Hero Factorywhere the bionicles were LEGO not chinese sh*ts. I was buying a bionicle every week or two weeks. I was crazy :D. When the Glatorians came out I slowed down and in 2010 the bionicle just disapeared. I was crushed. I tried to like the hero factories but the story just su*ks. It was like almost every story about heroes. Heroes are made in factories(this don't include the sentence before) some bad guys are coming into town the heroes beat him/her and the day is saved...Horaaay(are you kiding me). While Bionicle isn't just a story. Bionicle is religion. It has a story or facts for almost everything like Kolhi or the fruits in Bara Magna. You don't find such a thing every day. And I'm sure that if one very rich film director see this he will make at least 2 or 3 movies about Bionicle.

In 2011 I realized tha BIonicle isn't dead. I saw many sites that others fans make their own stories and characters. I saw life over here too. Firstly I thought that Bionicle will be forgotten. But I wasn't right. Such a thing couldn't forgotten so easily. It like forgeting your biggest love or even your name. I want to say to the creators of Bionicle "Thanks for giving me life in dark days (when girls don't care about you :'(...) you can always give up with Hero Factory and start again. The little six years old fans of HF will apolagise you. Let them believe in the true story. Let them telling their children what great childhood they had with Bionicle because I will do it. The Bionicle stories will be their goodnight stories. I sure other will do this too....

Oh God. I"m about to cry after that. When I look above and I'm telling to myself "Damn. I can be a great writer". But probably I won't. My dream is to be a film director(and when I make 70-80 I will be Santa Clous). And if I don't make a film(s) about Bionicle I will go to Hollywood and tell Steven Spielberg or James Cameran to let thir ideas away and to make film a triology or even e serial about Bionicle. I'm glad you are so patient and crazy to read all these because I can talk a lot without saying nothing(very good utterance). But if you like that thanks and write on my wall(maybe I need to put this in the end but it's good here :)...). And how we say in Bulgaria "Довиждане (goodbye)".

I don't have many bionicle (the reasons are up) but I have some and if I can maybe one day I'll have more.

Sorry for another late welcome and you should put the things about that is on your talk page and move it to the profile (if you are still active). Check out Millennial Shadow or DIE! (talk) 18:02, June 15, 2013 (UTC)

Retrieved from "https://bionicle.fandom.com/wiki/User_talk:Pavel8332?oldid=169434"
Community content is available under CC-BY-SA unless otherwise noted.